Imagine you’re on death row. What would your last meal be?
Kelly Gissendaner chose cheese dip and chips, Texas fajita nachos and a diet frosted lemonade. Who is Kelly Gissendaner? Those of you whom are up to date on current world affairs will already know, for those who don’t know, Kelly is the first woman in 70 years to be put to death in the state of Georgia. She was the only woman on death row. She was killed by lethal injection on 30th September, and sang the hymn ‘Amazing Grace’ as she died.

Kelly had had her sentence postponed twice before due to bad weather and concerns over the cloudiness of the injection. Third time, she was not so lucky. Despite pleas to the US Supreme Court just hours before her death, despite her showing remorse and completely turning her life around in prison, despite Pope Francis (who is a complete G, can I just add) publicly stating that the death penalty is wrong and writing to Georgia officials to commute the death sentence of Kelly, her execution still went ahead.

What was Gissendaner’s crime? The one that gave her the ultimate sentence, the one you can’t undo? In 1997 she planned, BUT DID NOT CARRY OUT, the murder of her husband. Her lover at the time carried out the murder. He is currently serving life in prison, he managed to get that as part of a plea bargain with the court. Yes, you read that correctly. The murderer is carrying out a life sentence; the planner was executed.

Now, in no way am I excusing what happened. They both deserve life prison sentences, but it just seems odd to me that the murderer was able to have his sentence reduced by testifying against someone he worked with to carry out this awful crime. Is that really justice?

I completely agree with them.

The Death penalty denies human rights (yep, that old chestnut), it is completely irreversible, and mistakes can happen. In the US alone over 150 prisoners sentenced to death since 1973 have later been exonerated – over 150 PEOPLE, HUMANS, were killed for a crime they didn’t commit. Many more have been sentenced to death despite serious doubts on their guilt.
Some argue that the death penalty is a deterrent for people committing serious crimes. Well, to that I say, you are completely, utterly 110% wrong. There is no evidence of this. In fact a 2009 study by Radalet and Lacock (THE JOURNAL OF CRIMINAL LAW & CRIMINOLOGY Vol. 99, No. 2 Copyright © 2009 by Northwestern University, School of Law) came to the conclusion that the death penalty does not add deterrent effects to those already achieved by long imprisonment. In North Carolina the murder rate has declined since the state stopped handing out death sentences. (http://nccadp.org/issues/deterrence/) Research actually found that murder rates are lower in states that don’t have the death penalty – and this has remained constant for the last 2 decades. It’s not just a phase. It’s real. On top of that, many police officers – so those that deal with criminals day in, day out – have stated that they believe the death penalty to be the least effective tool for crime fighting.

The death penalty was outlawed here in the UK finally in 1998, the last executions took place 50 years ago in 1964. I find it scary that it is still ok in so many places to kill someone under the title of ‘justice’ and ‘law’. In my opinion it’s not right, like I said, I have never believed in ‘an eye for an eye’. Even Jesus didn’t believe in it (Matthew 5:38). 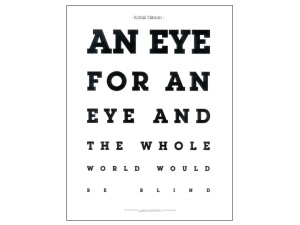 My ex-boss and friend Denise has always said I believe in a world where everyone should be friends and get along, which is never going to happen, but I really think that that would be the best kind of world. Whilst I know that that will never happen, at least not in my lifetime, I do think a world where there is no such thing as capital punishment is a step towards that kind of world. No one has the right to take a life, whether you cloak it as law or not. That’s my opinion anyway. What do you think?