It’s been a sad week in the world hasn’t it? You all know the horrid events that took place in Charlottesville last Saturday – the fact that there are still people in the world that believe themselves to be superior to others based on nothing more than skin colour is mind-blowing.

Then my darling Spain was victim of not one, but two terror attacks.

How is there still so much hate in this world? Do these people not realise we are all the same? Our hearts beat the same, our blood runs the same colour. We are all a mix of each other; is there actually anyone that can claim they are 100% pure English, Spanish or Indian etc? Our ancestors were probably all immigrants at one point or another.

For my birthday back in June I got a DNA kit from ancestry.co.uk. Some of my friends had done it the year before and I was immediately interested. My family tree is something that I am super interested in but unfortunately don’t know much about; both my nan’s passed away before I was born, we didn’t have anything to do with my paternal grandfather so there wasn’t anyone to ask about my dad’s side of the family. My dad knows bits but not loads. My beloved Pop-Pop (my Mum’s dad) was the only grandparent I had growing up, from him we know bits and pieces – there is definite Dutch heritage somewhere along his line.

I really wasn’t sure what to expect from my results but I was excited to see. I spat in a tube (super glam) and sent it off to the lab for them to work their magic.

When I got the email telling me my results were in… lets just say my jaw dropped. There was a bigger range that I had ever expected. 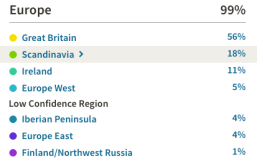 South Asia? Iberian Peninsula? Finland? Honestly the only result I was expecting was British, Irish and Europe West because that would account for the Dutch.

Of course I was super excited to get the results, my inner geek was rejoicing. I have always been interested in my heritage as I said. My point in sharing these results though is to prove something – we all were immigrants at one point. No one is superior over anyone. We’re all bloody mixed race! What I would love more than anything is for all these extremists to have their own DNA kit sampled – can you imagine their reaction if they found out they were descended from the very people they believe they were better than? Priceless. I’ll leave you with two things, 1. PLEASE BE KIND TO EVERYONE and 2. This video (apologies if you’ve already seen it, but I kind of proves my point ).